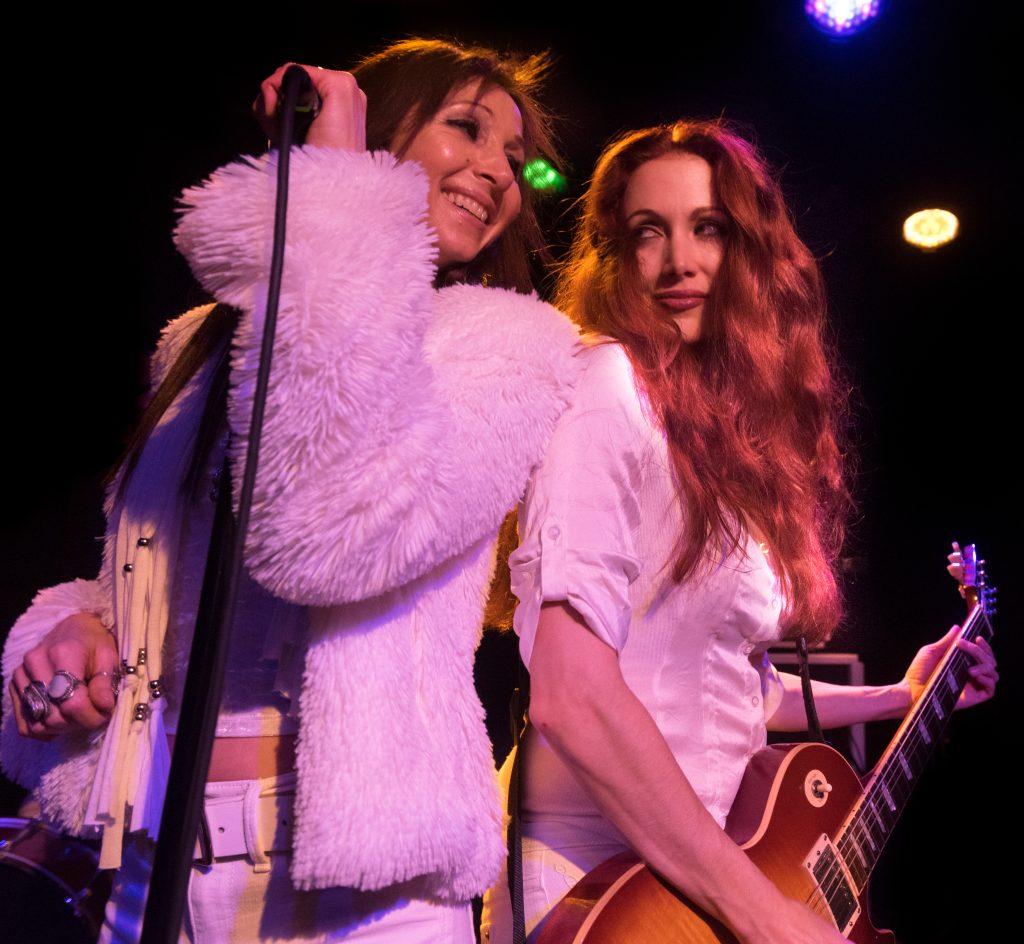 How to honor the legacy of a band deemed sacred? To tread on holy ground is perilous, and must be done with the intent and spirit of a disciple—Pay attention to the intricacies of the magic, explore the far ends of the innovation, strive for ever-growing ability, and let the purity of the love for the music drive it all.

Drummer Clementine is the founding member of ZEPPARELLA. From the beginning of her musical career, her goal has been to be onstage every night. The pursuit of that goal has led Clementine to constantly tour the US and Europe in projects as diverse as Bottom, AC/DShe, The House Of More, The Solid, Francis Bakin, Stars Turn Me On and Beaux Cheveux. She tackles the best rock drumming ever written with her own emotionally powerful style, bringing the Motown influence of the Bonham groove to the forefront. The profound musical connection established with Gretchen Menn (guitar), Holly West (bass), and Anna Kristina (vocals) creates the bond required to do this great music justice.

It was under the tutelage of classical guitarist Phillip DeFremery, a student of Andrés Segovia, that guitarist Gretchen Menn began her path on the instrument. Playing with tireless passion and constantly seeking out new challenges, her projects are often unconventional, genre-bending expressions combining elements of classical, rock, progressive, jazz, and metal. On influences, Gretchen has never tired of her initial inspirations—Eric Johnson, Steve Morse, Frank Zappa, and Jeff Beck. But she has loved Jimmy Page’s guitar playing longer than she has played the guitar. It was through the music of Led Zeppelin that she found a gateway into music that resonated deeply with her, creating a love for guitar-oriented music, and, ultimately, the guitar.

Bassist Holly West began her musical journey full-steam ahead, and more recently than her stellar playing belies. Her unstoppable will and drive have truly propelled her to this moment and her place in the powerhouse Zepparella. A self-taught bass player, she is also a blossoming vocalist with rich rock pipes. Her time on stage has been well spent, developing an impressive attack, impeccable feel, and a technique which seems to have come completely naturally to her, not to mention her dazzling stage presence and joyful performance style. Her influences span the rock gauntlet, from Clutch and the Rival Sons to Slash, ZZ Top, and of course, the mighty Zeppelin.

Singer Anna Kristina is a soulful, fiery, and rocking vocal powerhouse who has stepped into Zepparella’s Plant spot for a second time. Anna was with the band for 5 years, became known for her performance in the band’s 15 million-view “When The Levee Breaks” video, took a 6-year hiatus, and now returns in 2018 to front the band. Her career has spanned acoustic, jazz, soul, rock, and her charisma and power delivers captivating performances every night. About her brilliant harp playing she says: “getting a chance to blow on the harmonica is an added bonus! Plant isn’t just a singer he’s a musician. He brings his blues background and natural percussive feel to his harmonica playing as well and I love getting lost in that. Playing the harp allows me to express on a whole different level and it’s so freeing.”

Now more than ever, Zepparella explores their own improvised magic within the framework of Zeppelin’s mighty songs!