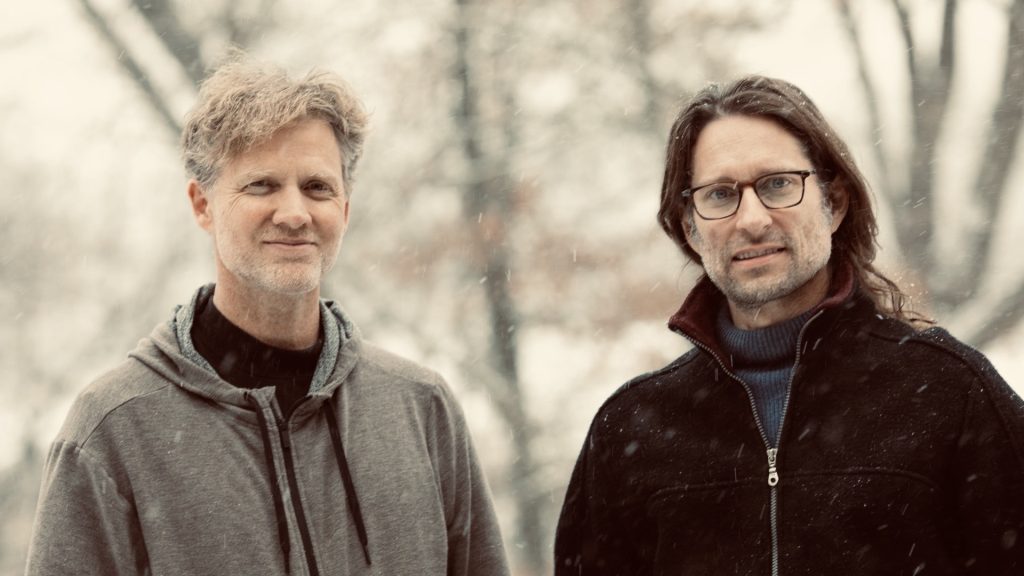 Storyhill is a folk duo that brings infectious melodies, smart story songs and heartbreaking harmonies together in one perfect package. Their beautiful music and passionate performances have won them much critical acclaim and devoted fans (“Hill Heads”) all over the country.  Chris Cunningham and John Hermanson grew up and started performing together as teenagers, while living in Bozeman, Montana. Both were musical from the get-go, singing with choirs, playing in bands and mastering many musical instruments—piano, guitar, trumpet, violin, harmonica, bass and accordion. Although their 7th grade world geography class is what ostensibly brought them together, it was their musical passions that made them close friends and lifelong musical collaborators. They recorded their first tape as Chris and Johnny in 1989, upon graduating from high school. Although they then temporarily parted ways—Chris going to Spain and John to Minnesota for college—they continued to play music. Chris, who had previously played piano with John, took up the guitar and focused on his songwriting, soaking up the Spanish culture. Meanwhile, John was making a name for himself on the campus of St. Olaf College, where he was pursuing a music degree for violin performance. He got regular gigs in town, performing his own original material. He encountered such success selling his and Chris’ first album that he encouraged Chris to come out and join him so they could play together. Chris did, and together they developed a strong fan following on campus and in the nearby Twin Cities as an acoustic songwriting duo. After graduating in 1993, they toured the country, playing the college circuit. For three years they toured constantly and recorded several self-released albums, selling an impressive number at their shows. Exhausted from the travel and finding themselves pulled in different directions, Chris and John, or Storyhill as they were now known, embarked on a series of farewell concerts (much to fans’ dismay). Chris moved west to Seattle for a year, then returned to settle back in Bozeman where he continued to play his own songs, fronted and recorded with a small acoustic band (Sixth Sense) and shared tours with Minneapolis-based singer-songwriter Justin Roth (resulting in a live recording—2 forms of ID). John, on the other hand, went east, moving to Norway for a year. There he wrote material that would result in his first solo album, recorded when he returned to Minneapolis. He began performing solo and with his band Alva Star.