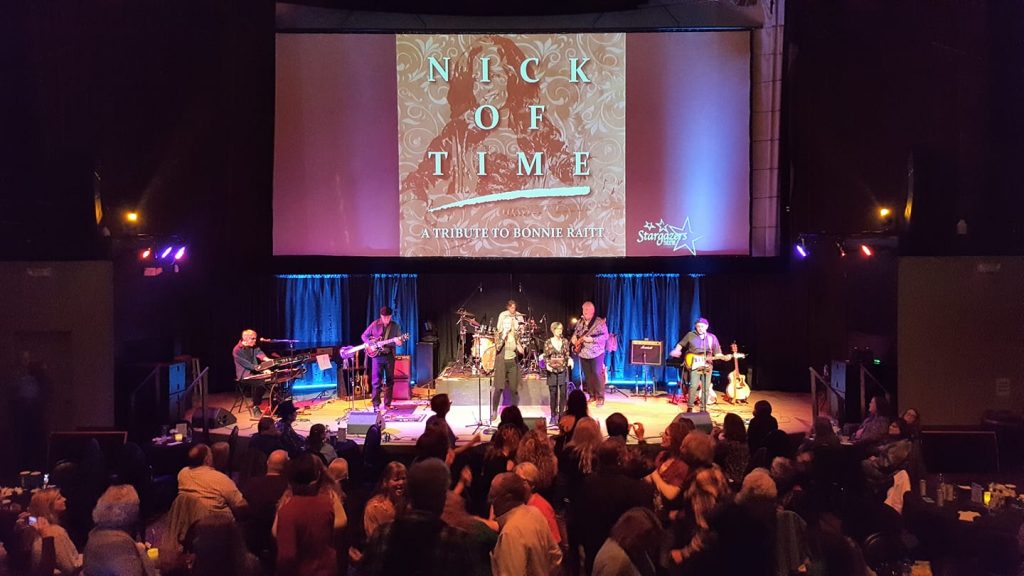 Bonnie Raitt’s career has spanned decades of timeless and Grammy award winning hits such as “I Can’t Make You Love Me, Something To Talk About, Thing Called Love, Nick Of Time, Love Sneaking Up On You, Angel From Montgomery, Runaway and many more. Nick of Time delivers these songs and more in a professional, upbeat and entertaining show that is family friendly.

Diana Wood – Vocals: Diana Wood is a veteran entertainer who has performed the National Anthem for the Colorado Rockies, the Denver Nuggets, with groups such as FAM Rock Choir Colorado, Homeslice, Moment’s Notice Entertainment and Hot Lunch, and nationally known artists Earth, Wind & Fire, FACE Vocal Band, Jimmy Hall and Exposè.  She brings the voice of Bonnie Raitt to the forefront and will make you long for more.

Jeff Bowen – Guitar: Jeff grew up in the Pasadena area of Southern California and began playing guitar at age 10. Starting out with surf music and then expanding into the many musical styles of bands popular at the time, he developed a wide range of interests. Moving to the San Diego area in his 20s, Jeff formed the Cross Bowen Band – performing mostly original music in the larger venues and clubs in the area; and sharing the stage with well-known artists such as the Marshall Tucker Band, Dave Mason, Jeff Healey, Savoy Brown, the Beat Farmers and more. In 1993, Jeff took a job working with Fender which moved him to Colorado. This position had him traveling a wide area of the USA and gave him 20+ years of “inside” experience in the music industry. Locally, you have likely seen him perform with My Blue Sky – Honoring the music of the Allman Brothers, The Complete Unknowns and The Vipers. His primary guitar influences include Duane Allman, Dickey Betts, Dan Toler, Warren Haynes, Jack Pearson, Eric Clapton, Eric Johnson, Albert Lee, Ry Cooder, Lowell George, Tony Rice and many others too numerous to list.

Tone Show – Keyboards and Vocals: A long-time musician, Tone celebrates his 40th anniversary as a professional musician this year (2019.) He is a prolific multi-instrumentalist – proficient on guitar, saxophone, drums and piano. During the 1990s in the record business in Tokyo, Tone worked on dozens of album and single releases, and logged over 5,000 hours of studio experience along with being exposed to a huge variety of music styles. In Colorado, Tone has played with local blues greats like Jack Hadley, Erik Boa and Randall Dubis, in addition to his duties as a sound engineer for Oskar Blues HMLS.

Eef Speeltmuziek – Guitar and Vocals: Eef, the tall-Dutch-girl-with-the-red-guitar, moved to the US in 1999 and currently lives in Denver CO. Her band Eef and the Blues Express was a Memphis IBC semi-finalist in 2017 and was nominated twice for Westword’s Best Blues Band. In 2013, Eef won the CBS Members Choice Award for Best Songwriter and has self-produced four albums that get airplay at blues stations all over the world. With Eef and the Blues Express she has opened for Coco Montoya, Tinsley Ellis, Nick Moss, Samantha Fish, Deanna Bogart, Bernard Allison. The Nick of Time Band is thrilled to have her guitar skills and dynamic persona in the lineup!

“Keeping the music of Bonnie Raitt fresh and relevant this group of accomplished musicians does just that. They pay the deepest respect to one of the worlds most accomplished musical catalogs and it’s done with energy, class and their own personal touch on such timeless music. Go see this band” – Michael Emanuele